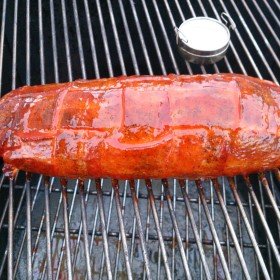 In a bowl, soften and combine a block of cream cheese and 2 oz of bleu cheese.  Fold in the carrot, onion, celery mixture and 1/4 cup of wing sauce.  Set aside.

Open the gallon bag with the ground chicken and using kitchen shears, cut down the side of the bag.  Carefully peel back the plastic and lay the formed ground chicken on top of your bacon weave.

Place the cheese mixture into the center of the ground chicken.

Using the foil to assist, roll the far side of the bacon and chicken sheet back over the cream cheese mixture.  Repeat with the front forming a meat log filled with the cheese/vegetable mixture.  Pinch the ends of the log together.

Unroll the foil and dust the meat log with the Ozark Seasoning.  After the meat is covered,  wrap the meat tightly with the foil.  Twist the ends of the foil tightly so that it compresses and forms the meat.

Prepare a grill for a low and slow indirect cook.  By shutting down your vents and cooking this way, you can keep the grill under 350.  This will take approximately 2 hours to cook.

You can also prepare a smoker to cook at 225.  It will take approximately 3 hours using this method.

Once your grill or smoker is up to temperature place the meat unwrapped onto the grill grate.  Cook until the outer layer of chicken is at 170 degrees.  You can also use the bacon as a visual indicator.  it appears to be browned around this temperature.

Glaze the fatty with a buffalo chicken glaze which consists of 2 parts of buffalo sauce to 1 part red jalapeño jelly.  Glaze in multiple layers to the desired thickness.  This may take an additional 1/2 hour.

When done glazing, remove from the grill and allow to rest.

Add
Enable Notifications.    Ok No thanks